Melrose is one of the great character singers of his voice type...

Live performances of Rudi Stephan’s Die ersten Menschen with Dutch National Opera went ahead! We opened on the 3rd June with five further performances with audiences. A video stream is available in on Arte.com

In Berlin, it also looks extremely hopeful that performances of Enescu’s Oedipe will happen in August and September at Kommische Oper. Information about that can be found here

Also, some plans for next year have been announced which include performances of Ruprecht in The Fiery Angel in Madrid, Clov in Fin de Partie at Opéra national de Paris and Propsero in The Tempest at La Scala.

Artist, rebel, Icon. Brett Whiteley burst onto the international art scene, all golden curls and bravado. He was dynamic, damaged, a big idea and a bold brush. Heroin was both muse and merciless master. Out of this tumultuous life spilled a messy array of brilliant artworks and astonishing self-reflection. In 2019, this Australian icon meets two of Australia’s most popular artists in a brand new work for the Australian stage: Whiteley, by Elena Kats-Chernin and Justin Fleming. Together they’ve created an opera to honour the life and work of a man who could not extricate his talent from his demons.

Casting British baritone and contemporary music specialist Leigh Melrose in the title role was a masterstroke. He sang with resounding strength and incisive clarity in an intensely expressive performance that captured Whiteley’s charismatic charm and his painful, doomed struggle with the darker angels of his nature.

With tousled hair and a shambling mix of insouciant brilliance and existential anxiety, baritone Leigh Melrose sang and portrayed the precocious, sometimes unlovable Whiteley with a vocal range from wiry ferocity to ethereal dreaminess, spanning swaggering moments of elan and despair.

Melrose is particularly impressive… There is long, languid stretching of the vowels, singing each syllable to its edge, thinning into ethereal transcendence and thickening into anger, and allowing cracking at the manic extremes – as Whiteley did with himself and his work. Melrose’s portrayal is intense and self-consumingly ferocious, and he carries this opera compellingly.

The world premiere at La Scala of Kurtag's Fin de Partie, with further performances in Amsterdam and Valencia

György Kurtág, whose compositions left an indelible mark on the development of twentieth-century music, had never written an opera. At least, not until he had turned ninety. Applying his bare, concentrated, intensely expressive style to Samuel Beckett’s 1957 austere play, the world premiere was conducted in November 2018 by Markus Stenz and directed by Pierre Audi. Further performances were at Dutch National Opera in February. 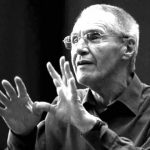 
"Shuffling around nervously, Clov (the robustly gruff baritone Leigh Melrose) is characterized in jittery blots of music, as if he consists entirely of punctuation marks."The New York Times

"...baritone Leigh Melrose [also deserves high praise] who made Clov's powerless anger truly uncomfortable to behold. Tightly wound and hobbling about savagely, at the end when Clov decides to abandon Hamm, or maybe not, he looked as if he were about to blow up."bachtrack
Previous
Next

“As Nekrotzar and with a voice as strong as his acting skills were convincing… Leigh Melrose stood at the pinnacle of an outstandingly gifted cast.“

"Musically, it's astonishing. Melrose, giving the performance of a lifetime, charts Wozzeck's disintegration with unflinching veracity and an extraordinary expressive range that veers from lyrical intensity to snarl or eerie falsetto."